Properly caring for a wolfdog is not just limited to one thing.  Responsible ownership covers many areas and each area can require slightly more or less fine tuning depending on the individual animal.

All of us at Texas Wolfdog Project hope to provide current and potential new owners with the information and resources to better care for their wolfdog and/or wolfdogs they may share their life with in the future.

The information provided here will be in a Q and A format for easy reading. Here are some of the most common questions we get asked, as well as questions to ask yourself before considering adopting or purchasing a wolfdog. 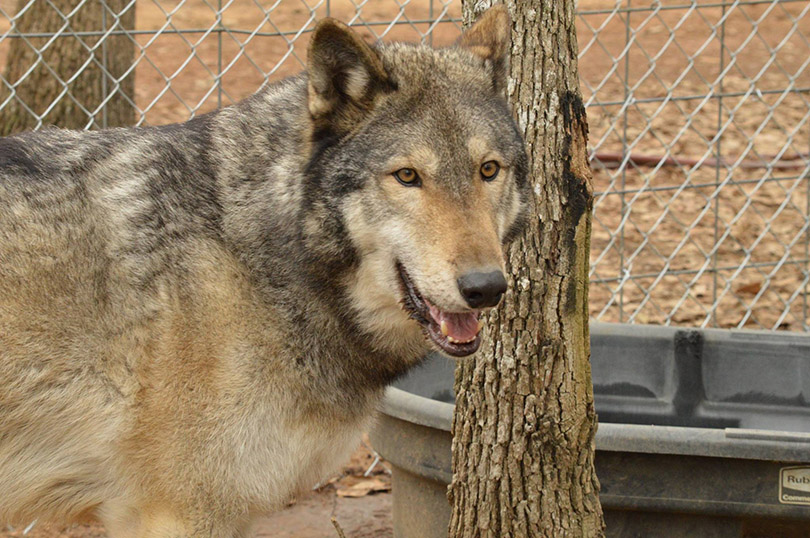 QUESTION: What is a wolfdog and where do wolfdogs come from?

ANSWER: Wolfdogs are any cross of a wolf bred to a dog, a wolfdog bred to another wolfdog or a wolfdog bred to a dog with varying amounts of wolf heritage. The majority of wolfdogs being produced now are from wolfdog to wolfdog pairings.  Pure wolves are not as common for private ownership breeding in recent years. Wolfdogs are purposely bred and sold by breeders in many states across the United States. Wolves are NOT pulled from the wild for stock.  Most foundation animals have been captive bred and raised for over 40 years, dating back to the fur farms in the 60’s and 70’s. 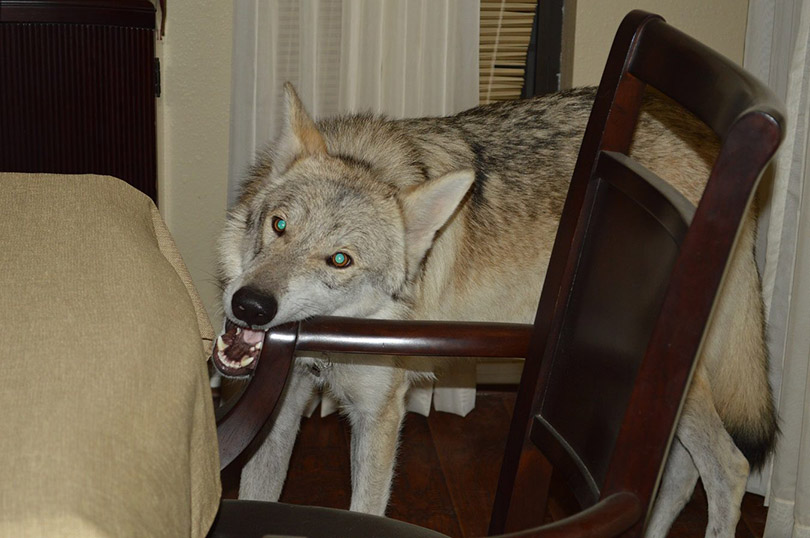 QUESTION: Do wolfdogs make good pets and can wolfdogs be house trained?

ANSWER: There is no simple answer for this because this greatly depends on the individual animal and the amount of wolf that has been inherited. Generally speaking, your lower content or animals that express more dog like traits overall will be more easily adaptable to home type living, possibly even being inside full time without any incidents. An animal that has inherited and expresses more wolf like traits, tend to require an owner experienced with these behaviors as well as proper containment and enrichment outside. Short, supervised sessions in a “wolf proofed” environment is usually the extent of a higher content wolfdogs inside time due to their nature to investigate with their mouths, despite all attempts to curb this behavior.

QUESTION: Are wolfdogs good with kids?

ANSWER: This is also a question that would be dependent on the individual animal’s temperament and experience with children.  Texas Wolfdog Project generally advises that wolfdogs should not be in homes with children under 12. Due to the size of most wolfdogs, sometimes heightened drives and resource guarding, placing an animal in an experienced home or one without kids is usually the best option for all parties involved, especially if that animal has never previously been raised around or exposed to younger children. 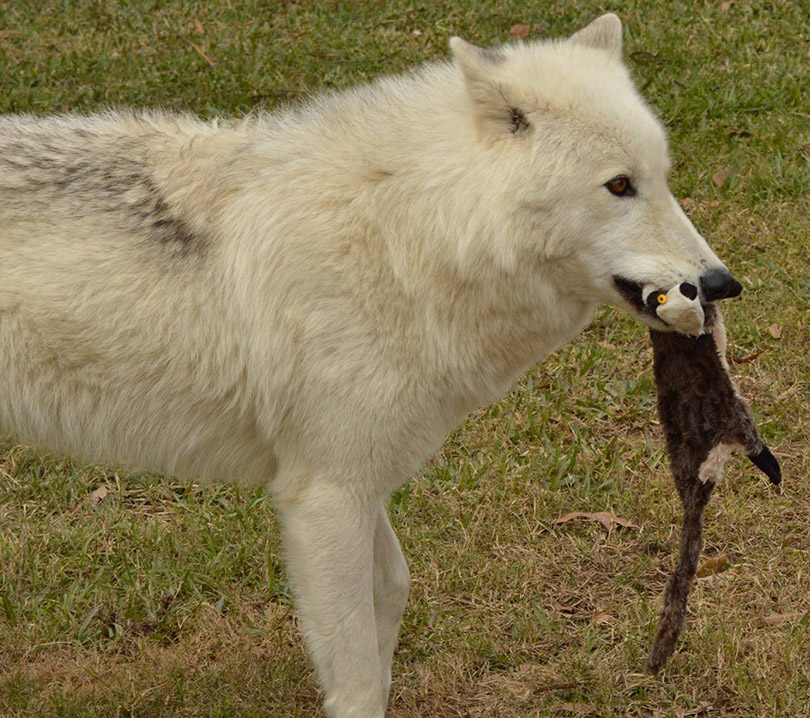 Don’t worry everyone, it’s a toy!

ANSWER: Ultimately it again would be dependent on the individual animal, though typically the answer is no. Wolfdogs tend to be very large animals with heightened drives and behaviors, including a predatory drive. Many times small animals, cats and small dogs are considered a prey item (especially when the animal has never been raised around or exposed to these much smaller creatures) to a much larger wolfdog, and even many regular dogs. 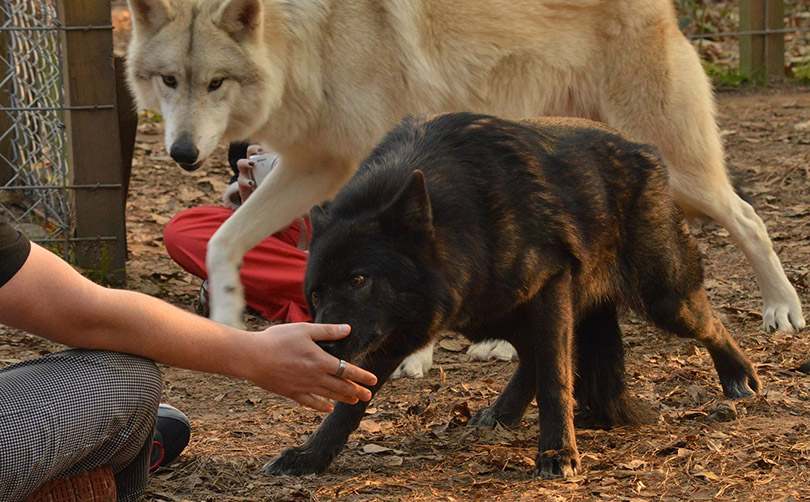 HIGHER CONTENTS: Many higher contents get severely car sick and do not travel well, even being resistant and difficult to get into a vehicle. Higher contents typically need a large (50 x 50 minimum) and very secure outdoor enclosure as most do not do well in the house, regardless of age or how they were raised. Higher contents are generally timid of people they don’t know and don’t do well in public settings.  Many also tend to over react and be extremely sensitive to everyday normal sounds or objects that most dogs would not react to.

LOWER CONTENTS: Most lower contents ride ok in the car and/or are more manageable. Lower contents tend to be better in the house and may not require such an extensive enclosure. Lower contents are generally more outgoing and friendly with people they don’t know and most are not as sensitive or reactive to everyday things.

In the end, each individual animal is different, but generally speaking, lower contents overall tend to be easier to work with and manage than your higher content wolfdogs. 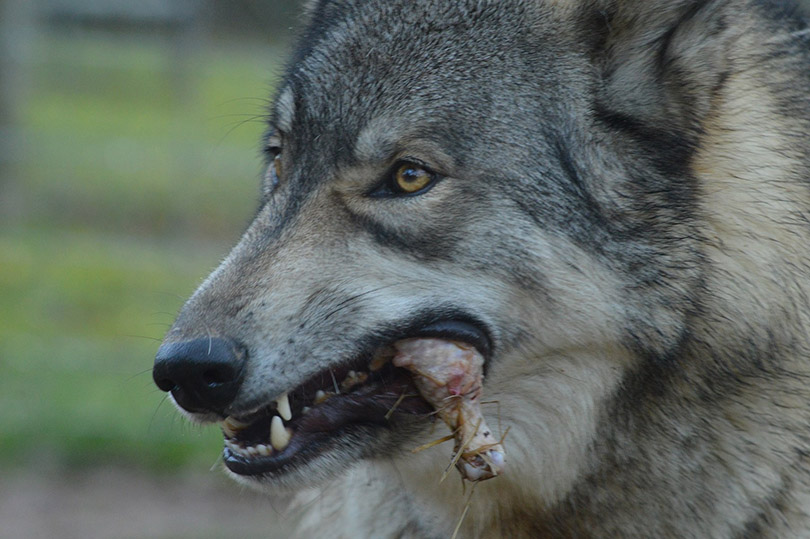 QUESTION: Do wolfdogs have any special dietary needs?

ANSWER: Though all of our animals are fed a balanced raw diet, if that cannot be properly maintained by any potential adopters or owners, Texas Wolfdog Project recommends a high quality, grain free kibble for normal, everyday feeding. Some wolfdogs, usually high contents, can be intolerant to certain grains/processed foods.

QUESTION: What is the average lifespan of a wolfdog?

ANSWER: 12-18 years, though this can largely depend on the dog breeds in the mix and the wolf content. Either way, wolfdog ownership is a serious commitment for several years/the duration of their life. 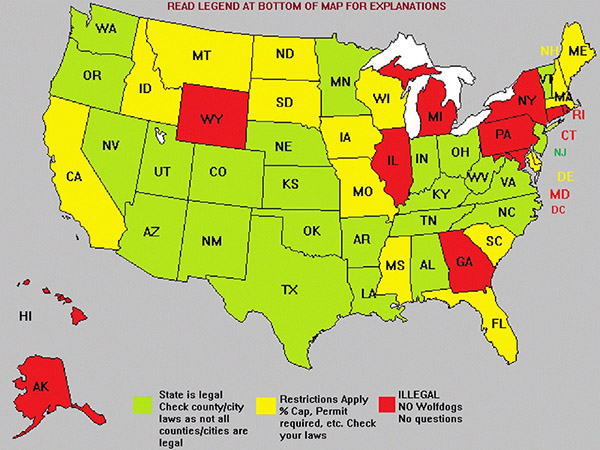 QUESTION: Do you live in area that legally allows wolfdog ownership. Are there any restrictions for my state, city or county?

Wolfdog ownership is illegal or regulated in many areas, with even more states and counties hopping on the “BAN wagon” due to the massive increase of animals being bred and sold to irresponsible owners…which in turn has lead to several incidents across the country involving wolfdogs of various contents.  All it takes is ONE incident to cause a ban. Please be a responsible owner and make sure they are legal in your area. This is a very serious issue.
February 2016) Currently the State of Alabama is proposing a STATE WIDE ban of all wolves and ANY wolfdog/hybrid cross. Also the State or Oregon is proposing similar regulations

QUESTION: Are you aware that there is no approved rabies vaccine for wolfdog crosses? Do you have a vet that will treat and fully vaccinate your animal?

Part of the reason it has become so easy to ban or regulate wolfdogs is because there is no USDA approved rabies vaccine for wolfdogs crosses in the United States. This is used as leverage against owners to ban, regulate or otherwise deny vet care to many wolfdogs. Avoiding the use of the words wolf, hybrid, wolfdog or wolf mix on any paperwork could save your animals life. Finding a vet that will provide your wolfdog with all the proper vaccinations (including rabies) as well as a legal rabies certificate is extremely important. 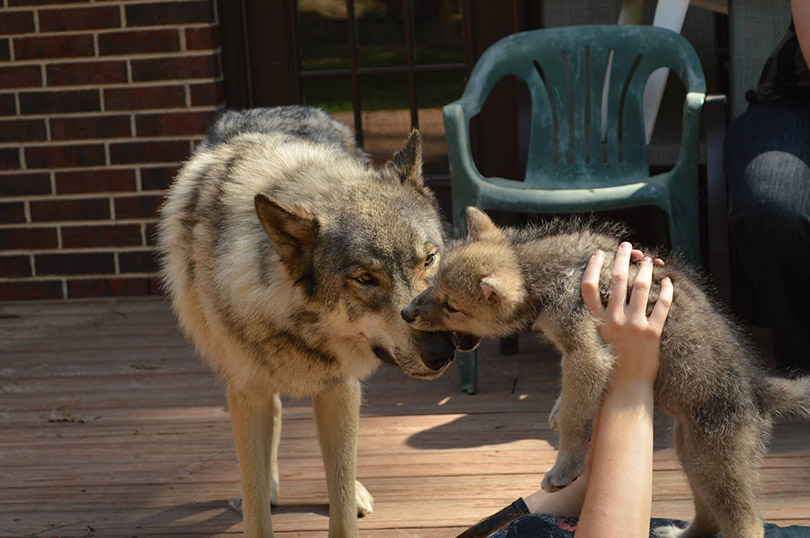 QUESTION: Do you have the time the properly raise and care for an adult wolfdog? What about a puppy?

Wolfdogs are highly intelligent animals and require a lot stimulation and enrichment to keep them mentally and emotionally sound. If the extent of their interactions is an hour or two after work outside with them and their companion, then a wolfdog might not be the best choice for you. Daily forms of enrichment and interaction are vital to the progression of their socialization and overall health.  A wolfdog puppy requires just that much more. Raising a wolfdog puppy is a FULL TIME job, requiring numerous (and continuous) hours of socialization and training to ensure proper bonding and a good quality of life.  Wolfdogs that are poorly socialized live very stressful lives- after all, how enjoyable could life possibly be when you mess on yourself every time you see a stranger, have to go to the vet or get into a car? Proper socialization is a very serious part of wolfdog ownership, no matter the age or content.

QUESTION: Do you have the financial stability to properly care for a wolfdog for the duration of its life?

Wolfdogs can be very expensive animals in the long run ranging from special containment requirements which can cost upwards of 2,000 dollars to special dietary needs which can be quite costly per month, wolfdogs are well known for being high maintenance animals. Vet care costs money, especially if your wolfdog has a serious health issue. 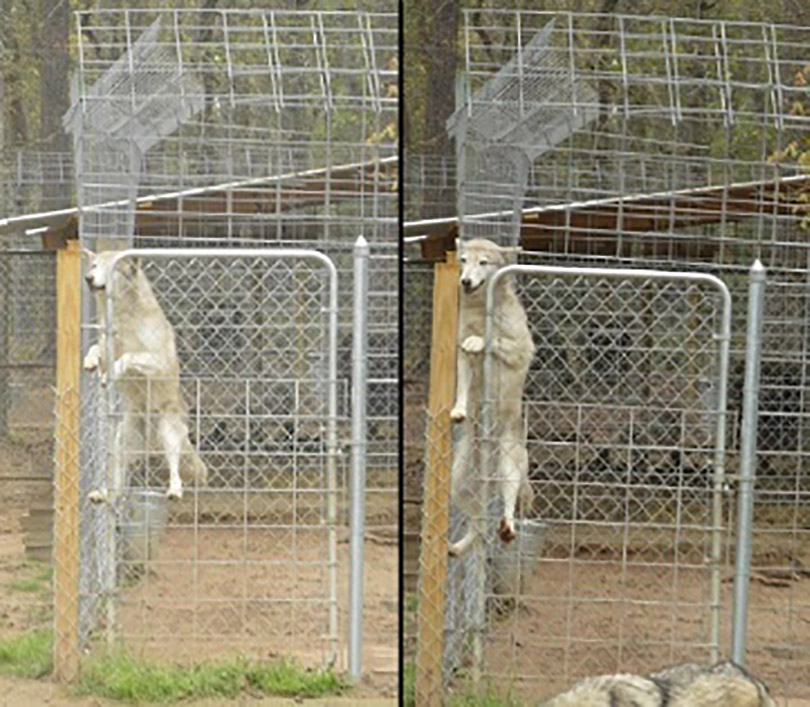 I think I see a gap!

QUESTION: Do you own your owner home/property? Are there any regulations/homeowners association rules that would stop you from building proper containment?

Owning your own home vs renting/leasing is very important. Most landlords don’t allow regular dogs, let alone a wolfdog that would require Ft. Knox like containment and would cause the landscaping to look like the craters of the moon. Most Home Owners Associations (HOA) have restrictions against fences taller than 6 or 7 ft and against certain types of fencing as well which could pose a problem for providing a wolfdog with proper containment. 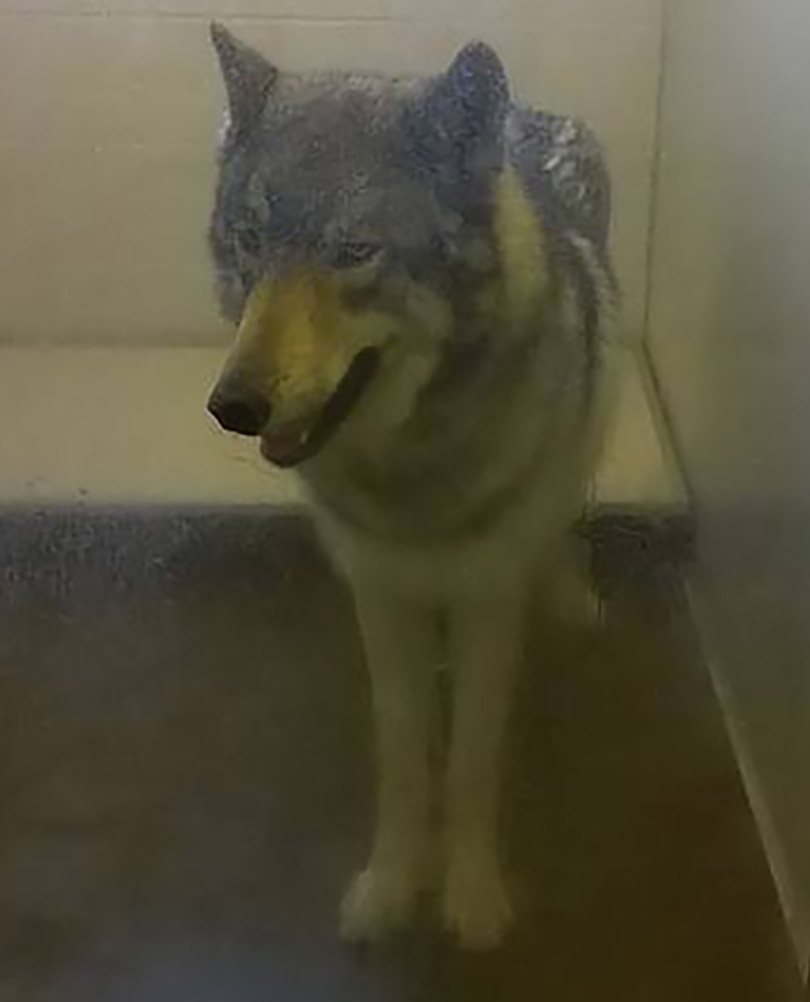 QUESTION: Vacations? What are those? If you can’t take your wolfdog, what would you do? What if they are terrified of people they don’t know?

Though this can depend greatly on the animal, most wolfdogs do not travel well. So if you cannot take your animal with you, what would you do?  Most boarding places will not accept wolves or wolfdogs not being equipped to handle pr take care of these animals and their special needs.  Wolfdogs also tend to stress very easily, especially in new places with strange people and smaller, confined areas. Ultimately if you cannot find someone to care for your animals on property that they are comfortable with (key word being comfortable), the word “vacation” may become a long lost word.