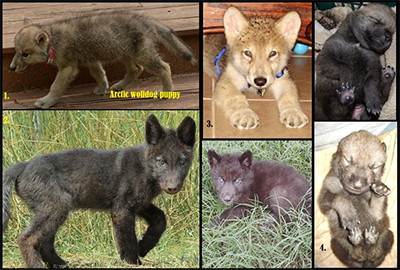 WOLVES:  North American wolf subspecies breed in the late winter months, with females becoming fertile starting the beginning of February and males being fertile the same time as females. Wolves also don’t become sexually mature/able to reproduce until their second or third winter. Both male and female wolves are only fertile ONE time a year during this specific time. Male wolves’ testicles will shrink to about the size of a small marble, becoming infertile until the next season. Breeding usually takes place in the middle to end of February.  Some extreme north subspecies, such as Arctics, may breed slightly later in the month of March. Gestation is similar to that of dogs, between 57-65 days, with 63 being the average. Puppies are born from late March to early May, with April being the most common month.  Arctics are usually born in May and in rare cases, the very beginning of June.

Puppies are born unison in looks and formation while being dark and solid in color. Wolf puppies will be born with black paw pads, noses and pigmentation and retain very little, if any white markings.  Any white markings will be subtle and be restricted to a small spot on their chest or a light dusting of their toes. Wolf puppies will not be born with contrasting or otherwise, doggy looking markings such as white socks or booties, white tipped tails, facial markings or masking or be multi-colored. ARCTIC WOLVES are NOT born white! They are born dark and lighten as they age.  The very FEW cases of high content arctic crosses being born white or pie-bald was the result of severe (and several generations) of inbreeding or several generations of line breeding where BOTH parents carried the white gene from the dog in their lineage.

NOTE: Reproduction in wolves is not affected by climate, weather change or being around another intact animal. For example, an Arctic wolf that is born and raised in Texas, will cycle, breed and reproduce the same as an Arctic wolf living in Canada. Under extreme circumstances, reproduction cycles may be thrown off by cases of extreme continuous stress or severe malnutrition.

DOGS:  Most dogs can reproduce any time of the year with males being fertile year round and females generally having two heat cycles per year, or approximately every 6-9 months.  There are some primitive breeds, such as the Basenji, that have only one heat cycle per year.  It has also been observed in some northern breeds as well. Most dogs also become sexual mature/able to reproduce by the time they are a year, sometimes earlier. Gestation is approximately 57-65 days long with 63 days being average.  Puppies can be a variety of colors, ranging from solid white to solid black and everything in between.  Most Siberian Huskies and Alaskan Malamutes will have puppies born black/white or red/white with premature markings.  However, if the coloration is Agouti or sable, dark “wolfy” looking puppies can also be born. German Shepherds are also known to produce dark colored puppies. Dog puppies are usually born with pink noses and paw pads, though dark colored dogs (such as black or sable) can have black noses and paw pads as well.