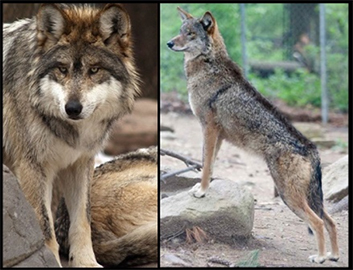 Due to the long time, critically endangered status of both of these wolves, they are federally protected and prohibited from private ownership- including any form of hybridization/wolfdog crosses, selling or otherwise any form of breeding or ownership under the Endangered Species Act. In simple terms- it is highly ILLEGAL to possess, let alone breed and sell ANY Mexican Gray, Red Wolf or CROSS/HYBRID/WOLFDOG of these animals. Is it possible that prior to their critically endangered status there were few licensed breeders/private owners? Yes, but considering how unlikely and how long ago that would be, any trace of that lineage would be minuscule. Any breeder or owner claiming to have Mexican Wolf or Red Wolf in their lineage, especially if they are claiming a pure parent or a significant % are lying and/or breaking quite a few federal laws.

Both the Mexican Gray Wolf and the Red Wolf have very distinct looks. Mexican Grays usually being smaller than most N. American sub-species running about 70lbs and 28-30 inches at the shoulder, having a darker grizzled coloration with a lot of banded browns and blacks as well as notably larger and more rounded ears. The Red Wolf is overall very similar looking to a coyote. They are slightly larger, running closer to 50-60lbs and about 26-27 inches at the shoulder. Their coat is well blended, consisting of different shades of brown, gray and black with a distinct red tint.