Phenotyping is the observation of physical traits and characteristics expressed by any living organism.

Properly identifying suspected wolfdog crosses is much more detailed than the few, and often times misleading, “I know my dog is part wolf” traits that the general population seem to be stuck on. While some of these traits are often seen in wolfdog crosses, they are not “wolf exclusive” traits and can be seen in many different dog breeds as well. This can be problematic when people are stuck on attempting to phenotype their own animals or animals that end up in rescue situations that are being evaluated by people unfamiliar with pure wolves and the many wolf-like traits that can be thrown by different Northern Breed Dogs. 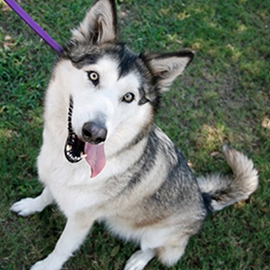 Rhea - Alaskan Malamute
But mom, I have yellow eyes…doesn’t that mean I am part wolf?

Who should phenotype a wolfdog?

While proper identification by way of physical phenotyping and identifying other traits of the behavioral and biological sense can be considered fairly accurate, the person doing the phenotype/estimation of wolf content needs to have a wide range of experience with not only different subspecies of pure wolves, but also various dog breeds and wolfdogs of different mixes and content ranges.

In short- the final phenotype of an animal is only as good as the person doing the evaluation.

What purpose does phenotyping serve?

Many wolfdogs that are sold today have very little to no lineage information on them and are usually claimed as being more wolf than what is truly present. The percentage and claimed content is only as accurate as the lineage that is being provided and the source of that information. If the lineage of the animal(s) has been misrepresented, a thorough phenotype is going to be the most accurate way to determine if any wolf content is present and an estimate of how much. Phenotyping is very common in rescue situations because in most cases, lineage is not able to be provided and/or is not accurate.  Being able to break down traits in a case where an animal was labeled as a wolfdog, and is not, could very well save it’s life.

Where do you start when phenotyping a possible wolfdog cross?

While there are many different traits to look for when preforming a detailed phenotype, one must remember that wolves and dogs are the same species and do share some similar and overlapping traits, especially northern breed, Spitz breed and primitive breed type dogs. One must also remember that there are even slight to moderate variations even within certain breeds depending on lineage and breeding, so just because an animal doesn’t look like an Internet image of an AKC Champion Siberian Husky, doesn’t automatically make it part wolf. Being able to break down traits and see past things like coat coloration or having yellow eyes is just the start of being able to effectively phenotype and identify a wolfdog cross.