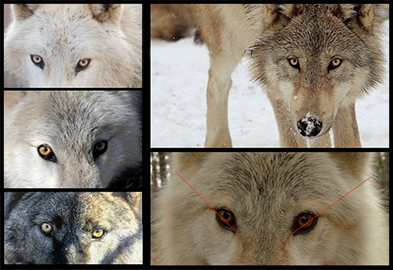 WOLVES: Wolves have distinctly almond shaped eyes that tend to be more close set on the face and are slanted, with the corners of the eyes lining up with the outer base of the ears. This oblique angel forms a 45-degree angle on the face from the eyes to the ears.  Wolves eye colors range from amber to pale yellow and even green. Blue eyes and dark brown/black eyes are a dog trait. 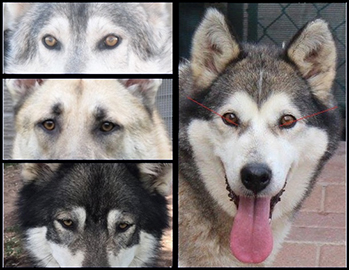 DOGS: Eyes tend to be more rounded and “soft” in appearance and set straighter and wider on the face. Some northern breeds, such as Alaskan Malamutes and Siberian Huskies, can and often do have almond shaped eyes as well as an oblique/slanted set to their eyes, though typically not as angled as a wolf.  Eye color ranges from dark brown, bright yellow, to green and ice blue.