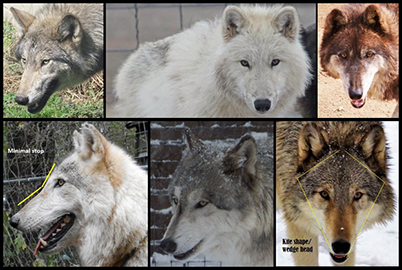 WOLVES:  Wolves heads are large in comparison to its body. The head is wedge shape in appearance, very similar to the angles and shape of a kite. Wolves also have distinct skull measurements, one of which is a 40 to 45-degree angle that is measure on the side of their head from their eyes to their ears. 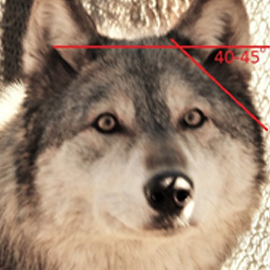 The skull (top of the head) should be relatively flat with only a slight slope from the back of the skull/bump on the back of their head (occipital bone). There should be a minimal or slight stop- or the point on the forehead where the muzzle meets the head.  In addition, a wolfs muzzle length should be the same length as the skull, from the eyes to the base of the skull. Lips should be black and close fitting and nose should be large, black and well textured. 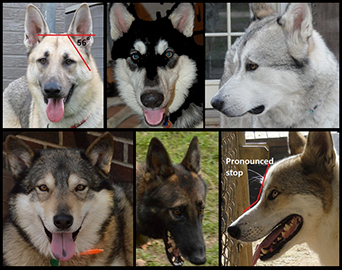 DOGS: Dogs heads are usually slightly smaller or average in comparison to its body. Their heads can range from very round or broad to very narrow.

In comparison to a wolf, their heads are considerably more narrow. A dogs’ orbital angle is usually larger too, ranging from about 50-60 degrees. 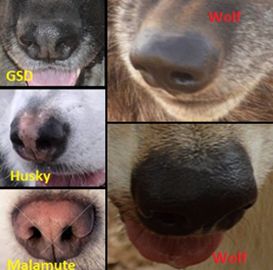 Dogs noses can be black, liver/blue (dilute), snow nose (pink stripe down a black nose) or spotted. Lips on dogs can be black, pink/liver or spotted (black and pink). Lips can be close fitting or loose and jowly.