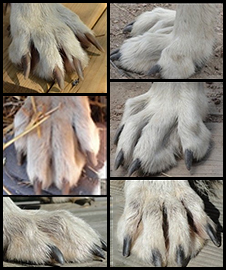 WOLVES:  Wolves have disproportionately large paws that have long, well arched toes, with the middle toes being longer and overall have a snow shoe like appearance. Wolves also have webbed feet with the webbing extending about ½ way in between the toes. The nails are thick and black or dark colored, with the exception of Arctic wolves that can have brown/taupe colored nails (as seen above in the top left and middle left photos). ALL nails should be the same color. Dew claws are fully attached and only found on the front paws. 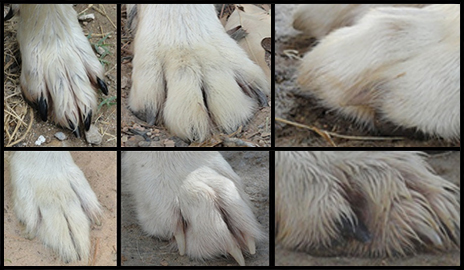 DOGS:  Dogs can have a wide variety of paws, ranging from large to small, longer and hare-like to smaller, compact and cat-like.  Webbing can be found on many dog breeds, especially hunting breeds and northern breeds. All dogs have front dew claws, however, many can also have rear dew claws- single or double as seen in most Livestock Guardian Dogs. Dogs can also have different nail colors, even on the same paw, such as white, clear, taupe, black or even ½ and ½! In comparison, dogs’ paws are proportionate or smaller and appear to be much flatter than a wolfs. Siberian Huskies and Alaskan Malamutes tend to have more rounded and compact type paws, while German Shepherds can have larger and more elongated paws, though they typically lack the arch, width and overall size.