Progression of phasing seen on a high content black phase wolfdog from year 1 to year 4.

WOLVES:  In addition to having a unique shedding period, some wolves will also have a significant change in coat color with each shed, many times called “phasing” as they tend to get lighter vs getting darker. While most wolves that phase are black animals, there are some grizzled and grey animals that can phase out as well, especially if they are mixed with a lighter subspecies like Arctic or Tundra. Some wolves also phase out faster than others.  While it may take one wolf 12 years to phase completely to silver/white, another might phase out as fast as 6 years.  Dogs can grey as they get older and some markings may fade, but not to the extent as seen in wolves. 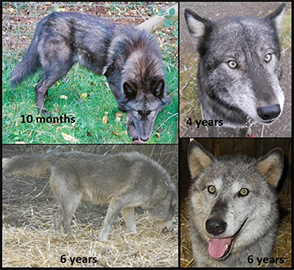