WOLVES: Wolves only shed one time a year in the spring months. Wolves will start the shedding process usually around the beginning of April and shed until May and are consistent about starting to shed the same time each year. Most dogs shed throughout the year or have twice yearly sheds (in the spring and fall). Wolves shed their entire undercoat and some of their guard hairs. The way they shed is considered more like a molt and has been compared to the way Bison lose their coat- in large strings and clumps vs dogs that tend to have numerous little tufts of fur that seem to never end, like on a malamute or husky. The contrast between summer and winter coats on wolves can be surprising and many people have asked if an animal was sick due to how terrible and ratty they look during the entire process. Summer coats can sometimes throw people for a loop when phenotyping as well. Only seeing an animal in its summer coat can make ears look bigger, paws look bigger, legs look longer, heads look more narrow but it can also give you a better idea of overall structure without the obstruction of a thick coat. 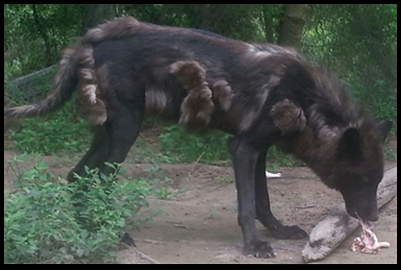 A high content wolfdog towards the end of his molt.

Shedding and coat growth is determined by the lengthening and shortening of days by the amount of natural sunlight that is absorbed through the eyes. Climate/temperature can affect coat length and thickness SLIGHTLY.  Ultimately, an Arctic wolf that was born and raised in Texas will still develop a coat that is consistent with its far north origin. Due to the latitude and the amount of sunlight present earlier in the season, in Texas, shedding may occur slightly earlier than normal- such as the middle to end of March vs the beginning of April.