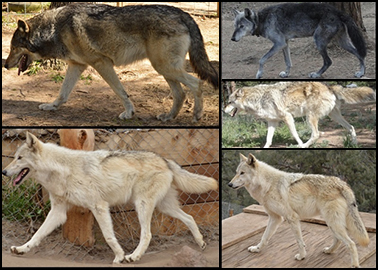 WOLVES: Wolves have bushy/well furred, bottle brushed shaped tails that are straight when at rest and when in motion.  Wolves tails also tend to be shorter than most dogs with their tail ending right at or above their hocks. Tails on grey/grizzled animals are usually tipped in black.  On some black animals and older grey animals, the guard hairs on the tip may phase to silver or white as they age.  This should not be confused with having a white tipped tail as seen in many dog breeds like Border Collies. 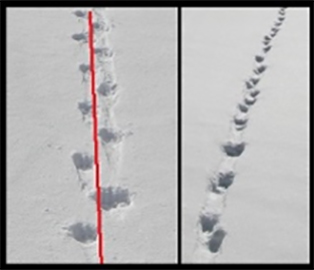 WOLVES: also have a very fluid and distinct way of moving. They do what is called single tracking, or where the hind legs swing in the same line as the front. Due to that movement the rear paws should land in or very near the spot the front paw has landed.  When viewed in the mud, wet on pavement or snow, the tracking should be in a single line VS the zig zag pattern most dogs leave behind. The gait of a wolf when walking, trotting or running is seemingly effortless and very flowing. 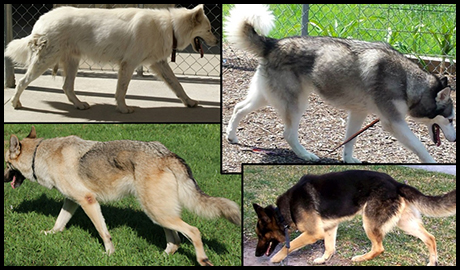 DOGS:  Dogs have a range of tails, from unnaturally docked to a tight, pig-like curl and while some of the more natural or primitive breeds can display tails similar to that of wolves, there are still some notable differences.  German Shepherds tails can be bushy and well furred, however, they are often longer, extending past the hocks and carried in a sickle when in motion. Alaskan Malamutes have very similar tails in shape and length, with it ending slightly above the hocks, though most malamutes have a tail that curls over their back when walking or when alert. Siberian Huskies have a bottle brush tail that usually ends at the hocks. Their tails do not always curl and often times when they are working, their tail is carried straight out or down. Some husky’s tails will be carried in a light curl or over their backs.

A dogs’ gait and movement is also a bit different than a wolf. Most dog breeds have a rough and choppy look to their walk, sometimes almost a bit bouncy. Most dogs do not display true single tracking and will leave paw prints that appear more side by side vs in a straight line. Their movement is not as fluid and easy as a wolf.