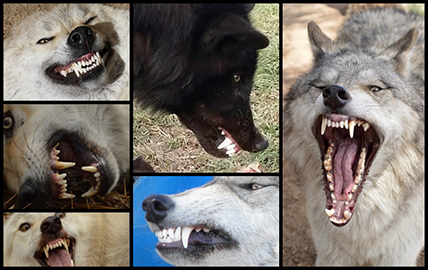 WOLVES: Wolves will have longer and thicker canine teeth than most dogs as well as larger and more developed molars. The canine teeth should appear thick, very large and curve slightly, coming together in an even scissor bite.  Under bites and overbites can occur though it is usually due to severe inbreeding. 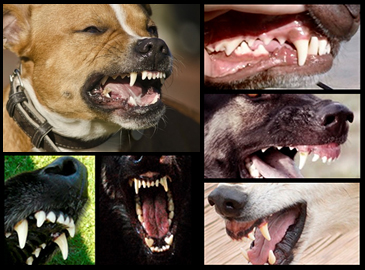 DOGS: All large canines should have 42 teeth though some smaller breeds or Brachycephalic dog breeds such as English Bulldogs may have less teeth due to crowding and jaw structure.  Some northern breed dogs will have smaller teeth while German Shepherds often have teeth of similar size, usually being just slightly smaller. While Siberian Huskies, Alaskan Malamutes and German Shepherds should have even scissor bites, under bites or overbites can occur.